Recently I’m interrupted frequently by one old retired neighbour who lost his partner 2 weeks ago. He wants to find a new partner as soon as possible through a dating site which he needs some help to set up. How does an old man online dating go?

I understand the holiday season can exacerbate feelings of loneliness. But I was surprised how men go immediately from one relationship to the next without any pause… After research I found that few men take the time to “process their feelings” regarding a failed relationship or to grief their loss, preferring to jump into the next one instead. Obviously it explains my old neighbour has such urgent need. 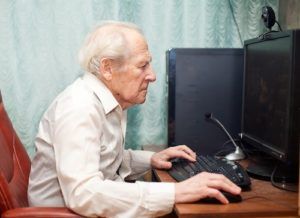 Helped him get a subscription and paid the fee on the dating website. After two days he came back and said no women responded. “Could you help to put up a new profile photo for me?”
Oh! Finally he realised his old photo looks out-dated, I thought. Sure, I would find time to help after my work at hand is done… Then he came back again and earlier than we agreed, I told him in one hour I would be available. When my dog and I arrived 30 mins earlier, his door was open already. My dog entered it directly, then I followed.

After checked his old photos, I decided to take a new life photo for him with my camera. He smiled when he saw his photo I took in his living room. Obviously his life seems much better in the photo than the real one. Well, it is full of hope, isn’t it?

I uploaded the new photo as his new profile photo on the dating website and saved. Then an alert showed that the new photo will be reviewed by the customer service, if it is passed then shows up as the profile photo directly. I explained it to him in both English and Dutch several times till he understood how it goes!

I also checked his self-introduction on his profile. It looks he didn’t write well. I told him it requires some change which makes himself more attractive to ladies..  The introduction can tell who he is and what he likes, etc. I gave him some simple Dutch descriptions, such as he likes working in the garden when the weather is lovely, he plants beautiful flowers, and he is social with neighbours to have dinner together. I also checked his matching engine needs to be defined.